As internal communicator at the European Commission, I had the privilege to participate to the 2015 Internal Communication Summit organised by Melcrum (now CEB) in London. During the summit, I took visual notes, sketchnotes, of many sessions and shared them on Twitter. Organisers quickly “found me” in the room and an interesting chat on the power of visuals started.   What follows is a transcript of the interview, of me by Iliyana Hadjistoyanova from Melcrum, that was originally posted  on the Melcrum site on 9 Nov 2015 (see the note): 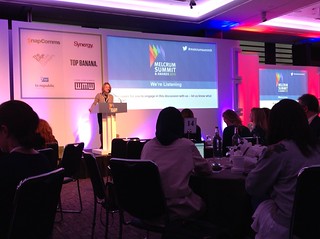 The 2015 Melcrum Summit brought together internal communicators from around the world for two days of lively conversations about organizational purpose. As delegates followed #melcrumsummit on Twitter to get the latest on Summit presentations, they noticed a set of incredible drawings pop up throughout the day, capturing presenters’ faces and arguments. Claudio Nichele from the European Commission is the communicator behind these drawings and he kindly agreed to share with us his personal highlights from the Summit along with the story behind his interest in visual storytelling. 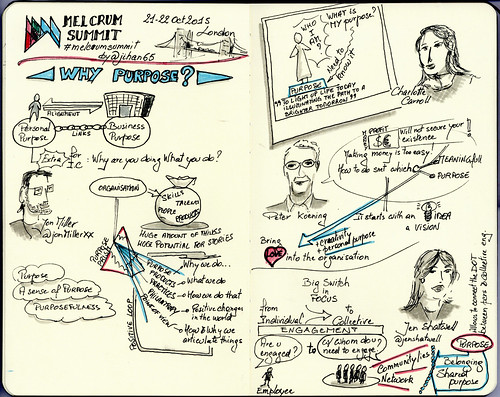 “For me the Summit is an opportunity to recharge my batteries by listening to great speeches and different points of view,” Claudio attested. “Purpose matters both at the top and bottom of the organizational pyramid, which is why it’s so important to make sure there’s a strong connection between organizational and individual purpose.” That balance between the two brings meaning to Claudio’s own work as an internal communicator at the European Commission. “A better Europe for me, for my friends, for my children, a better Europe to live in, work in, grow in; I’m totally aligned and working for that. At the Commission, we may disagree on different aspects of execution, but we are all aligned on the idea.”

Beyond child’s play: How does doodling work?

A study in the Applied Cognitive Psychology journal concluded that doodling can help us to better comprehend and retain information. When randomly tested, research subjects who were requested to doodle while listening to a phone call were able to recall 29% more of the information from the call versus those who just wrote down notes. According to the lead researcher on the experiment, doodling is instrumental in reducing episodes of daydreaming, which is a frequent response to the boredom a particular task might cause us to experience.

For Claudio, doodling is faster and easier than old-school note-taking, and the fact that he is an artist also helps, but that’s not the reason why he’s chosen to practice it. He insists that the goal of doodling isn’t to produce art, or anything beautiful, for that matter. Moreover, even though he started drawing at a very young age, he says that this is not an activity reserved for children. Claudio believes in the neurological superiority of doodling versus traditional note-taking and that’s the argument he uses to convince colleagues, who are unsure of their drawing skills, to try to take visual notes.

“When you’re doodling,” he says, “you’re working with both sides of your brain.” Taking text notes, for example, requires mostly using the left part of the brain. But when you start to draw, you’re accessing the other side, too – the one that controls imagination and creativity. In addition, you have the added layer of kinetic movement and you find both your mind and body involved in translating what you see and hear into visual notes. That kind of comprehensive internalization is crucial later on when you revisit your notes because it provides multiple reference points for teasing out memories. 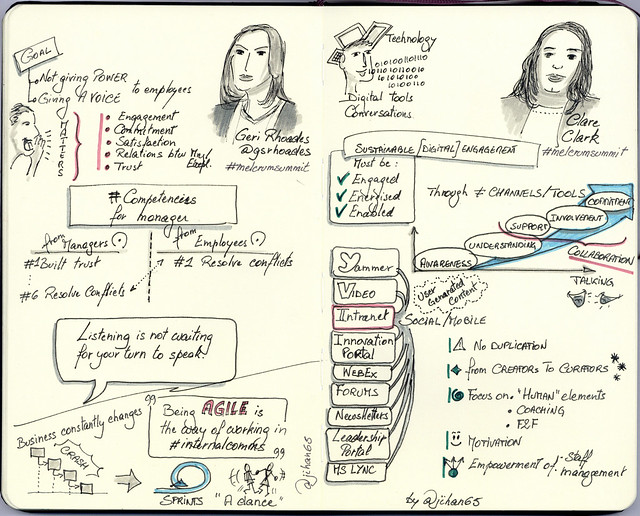 Another favourite for him was BNP Paribas Vinay Kapoor’s visual representation of the path from exclusion to inclusion. ”This for me is a complex topic that is brilliant to visualize,” Claudio explains. “The simplicity of his sketches was amazing and I actually took very few notes there because I just wanted to sit and listen.” 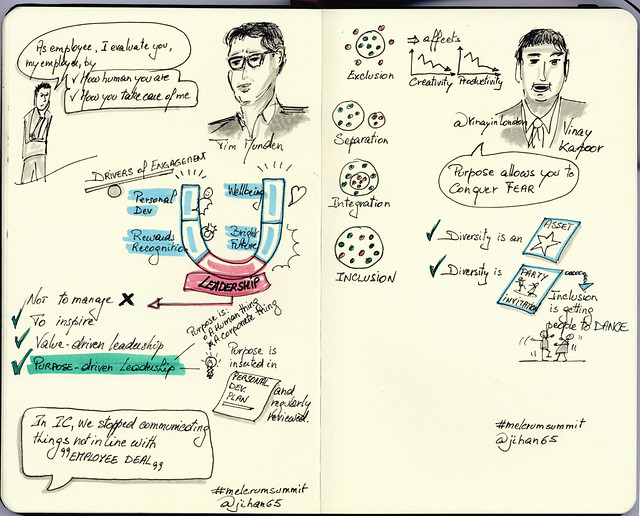 This brings us to another ‘must’ for productive doodling – the quality of one’s listening. When coaching people how to take visual notes, Claudio talks about different levels of listening. One could just listen and record everything word for word. Or, you could draw a simple image that depicts part of the presentation but that way you can fill pages and pages with disjointed drawings. However, there are deeper levels of listening where one builds connections between the elements of what’s been said, so being an active listener is essential when trying to tell a story visually. Read Kelvy Bird’s excellent post on “The 4 Levels of Scribing“. And if you’re too tired to doodle, just sit back and listen, Claudio advises.

But what if someone is really embarrassed of his or her drawing skills? “I’ve witnessed this many times,” Claudio confirms. “Many people regard doodling as something reserved for kids. If you see someone doodling in a meeting, you might assume that they’re not paying attention, that this is not serious, and I want to fight this assumption.”

Claudio isn’t alone in hoping to empower aspiring doodlers. Michael Gough, a developer at Adobe, argues that drawing might be as important as reading or writing for the way we learn to think and communicate. Thus, as part of the “drawing as literacy” idea, Adobe made its first investment into hardware in 2014 by creating an internet-connected stylus and ruler, which makes drawing on an iPad significantly easier, especially for those who aren’t great at art. For Gough, who was on the team that developed the new hardware and matching apps, drawing is one of the most creative and distinctively human activities in our technology-driven world because, as he puts it, “Machines don’t dream.”

To help peers overcome their shyness, Claudio advises them to start small by maybe trying to draw very simple images, like a cup of coffee, at home and then progress to more complex drawings, executing them gradually faster. He even recommends getting a group of trusted friends together to try out doodling collectively in order to exchange ideas and tips without feeling judged.

What’s in it for communicators?

Claudio believes that these are all points that could help communicators deliver messages more effectively. For instance, some years ago, his department was appointed a new Director-General (the equivalent of a CEO in a private company), who requested major changes in the way the Commission ran its intranet. When Claudio’s boss told him about the changes, Claudio tried to explain his department didn’t have enough time to apply all of them, given its available resources. So, he asked his boss to give him a chance to personally make his case to the Director-General. And instead of using Powerpoint or Excel, he quickly sketched a story, presented it and the Director-General accepted his proposition. Why? “Because I was disruptive. I approached him with unconventional thinking. When I went to his office with a drawing, he said, ‘Oh my God, what is that?’ And when he looked closely, it helped him think differently about the problem. This for me was the opportunity to make my case and he accepted my explanation.”

Indeed, at a time when the average human’s attention span is one second less than that of a goldfish, communicators need to fight a tough battle to keep employees interested. According to Claudio, creative visual storytelling offers a potential change in mindset that could provide a solution. “If you go to someone with a Powerpoint, which is something that is in their comfort zone and they are desensitized to it, they will carry on with their current thinking,” he explains. “But if you go with a drawing, which is personal and unconventional, they are startled for a second and that gives you a short window of time to really get through to them and to access a part of them that’s less resistant.”

“It works, I can personally confirm that,” the doodling communicator concludes and sends us off to try drawing our first cup of coffee.

Note: The Melcrum/CEB site is restricted to the company’s customers, you may have no access to it.

3 Replies to “Draw my mind: The benefits of visual note-taking”

See all my posts published since December 2017.